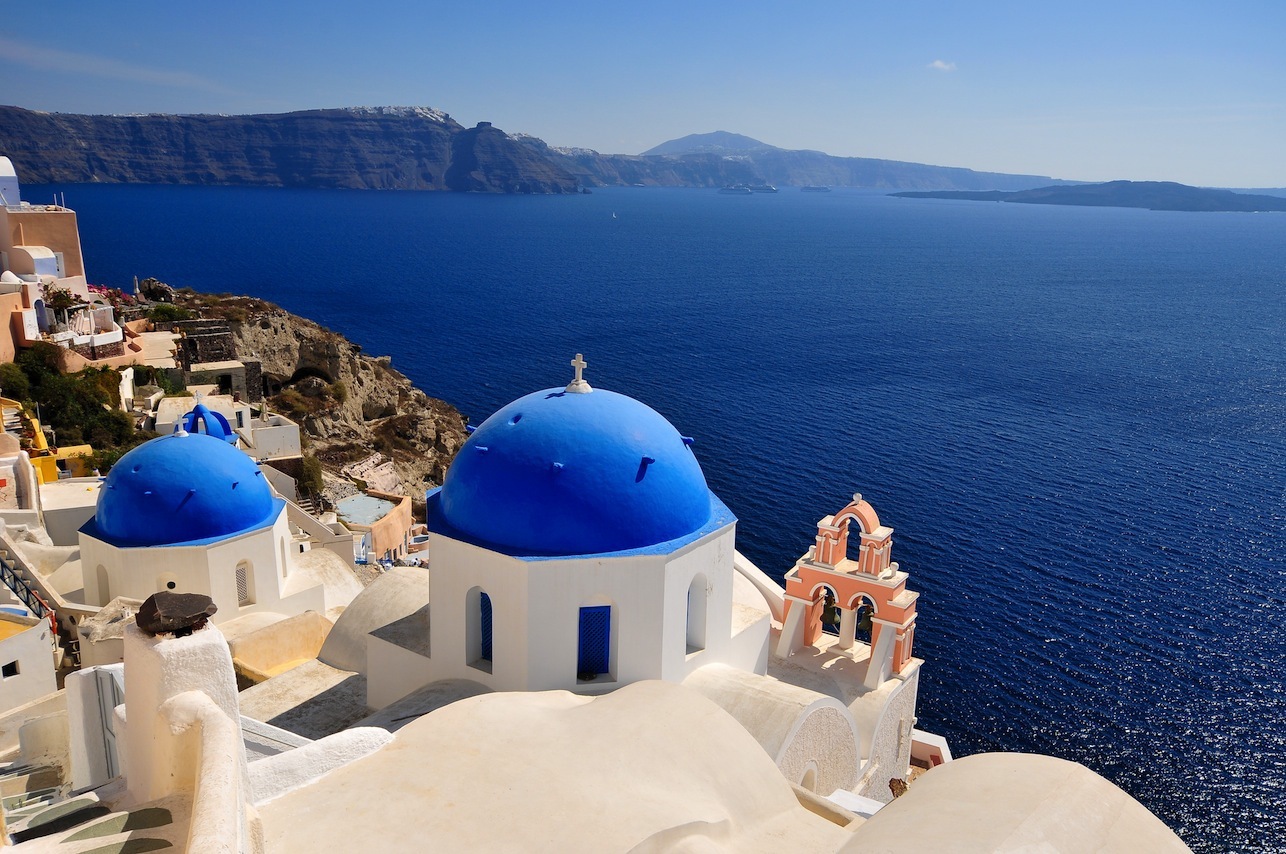 The island of Santorini is famous for many of its Biblical legends. Santorini used to be a volcano, which over time eroded into a crest-like shape island. Today, the outer cliffs is now a caldera between the Aegean sea.

Legend has it that Santorini used to be near the City of Atlantis. Another famous legend was the Biblical version of Egypt when the city had 40 days of complete darkness.

Historians believed this was caused by the volcanic activity set on the island of Santorini. The eruption was so massive that for 40 nights – Egypt’s sky was filled with dark arid matter and volcanic ashes.

Santorini is a colorful and magical place to be. There are over hundreds of islands in Greece. Santorini is by far the best island to just be lazy, sleep, and take pictures all day – also great for people watching too.

I stayed at a beach hotel called Perssia Beach Hotel. The architecture resembles Cycladic island’s homes, painted white to reflect the harsh summer sun. This was a common obligation, by law. Sometimes light ochre, pink, and some other light colors have been allowed. Last year, a big debate was re-opened between the Ministry of Culture and other authorities about re-allowing the use of other vivid colors. This conversation is still in progress. To be continued…

Santorini has three major cities – one of them is my neighborhood in Perissa Beach. The black sand beach filled with beachgoers and yahoo-ing tourists. Where you can also get strawberry daiquiris and mint mojitos for less than 7 Euros – and laying on the beach felt like you were melting in it.

The other city is Fira – the Capitol of Santorini. Fira is filled with European + Asian tourists and home to famous nightclubs and douchey dive bars. Everyone goes out in Fira because the nightlife + people are vibrant and colorful.

Lastly is Oia, this place is filled with majestic cliffs and cove-like homes sitting on every edge of a cliff. Thousands of tourists explore this village to experience the famous sunset. I decided to rent an ATV and drove to the village to experience the sunset. Sitting alone and seeing the sunset was surreal. I was surrounded by people from all walks of life. On my right, I had a family from Shanghai taking pictures and on my left and another Italian couple making out.

When the sun settled down everyone was cheering and clapping. The whole island was celebrating and dancing! Something so simple, like a sunset, is a HUGE celebration out here.

I met a nice Grecian who was a massage therapist, he took me out in Fira. I kinda of an Alexis Bledel moment – I rode on the back of his motorcycle as we watched the stars and went dancing at night.

Day 1: I rented an ate to explore the island

Day 2: Lounged by the beach and talked to natives that lived in the area.

Day 3: Traveled on a sailboat to a volcanic island called Thirasia. When you get on the island you get to walk around and visited a dormant volcano called Nea Kameni. The sailboat will take you to a hot spring where you can go swimming.

Day 4: Took a donkey ride from the bottom of the boat dock to the Village of Oia. Shopped a bit in Oia.

Day 5: I missed my flight, so I had to stay an extra night in Santorini. I met an another Canadian doing a solo trip and we both decided to do a 4-hour hike from Fira to Oia.

Santorini is known for their famous sea salt greek yogurt, olive oil, and red wine. On my first day, I had a sea salt greek yogurt covered in olive oil – it tasted splendid. On the island of Thirasia, I had a fried fish, rice, and bread w/butter. The fish was bloody delicious. At another nearby restaurant, I ordered a greek style spicy paella. It had octopus, squid, olives, and turmeric. The food by far was ahh-amazing!

For dinner, I ordered spaghetti because it was filling and kept me full from day to night. I had every type of spaghetti you can image – from seafood, alfredo, pesto.

Greece You Have My Heart

I love Greece. Santorini is pretty magical so bring a camera and take pictures of EVERYTHING – because there is so much to see. I love it here, especially swimming in the Mediterranean ocean as the sun set over the horizon. Magical moment.

Lifestyle, food, travel and education View all posts by Jess